We started the day off with a full set of stretches. This is a new addition for us and we hope it will ward off any future injuries. We also walked more slowly and took more frequent breaks than usual to gradually transition Shutterbug’s knee back into thru hiking shape.

The morning was chilly, but not nearly as frigid as our first morning on the trail in March. As we walked, we saw lovely details in the forest.

In general, water on the AT has been plentiful, and today was no exception. This stream in particular caught our eye.

Most of our camping patterns from the PCT have carried over to the AT. However, each evening on the Appalachian Trail we hang a bear bag instead of using bear canisters. It takes a bit of extra time, but there are plenty of trees around so we are always able to find the ideal branch. Shutterbug fills a sleeping pad stuff sack with a couple rocks, attaches it to a 50 foot long rope, and throws the rock-filled sack over a designated branch. Who knew all those middle school baseball practices would come in handy?

After throwing the rope over the branch, we untie the stuff sack of rocks and attach our food bag. We hoist the food out of a bear’s reach and secure the rope to a nearby tree. We sleep soundly knowing our food is safe.

First thing in the morning North Star got very exciting news: she became an aunt! Three pictures of little baby Jack came via text message from her brother Jim. Jim and his wife Cindy are very excited to embark on the adventure of parenthood. One day we hope to take Jack on hiking and camping trips. We’ll keep the distances short though!

The day was beautiful. A mild temperature and gentle breeze made for perfect hiking weather. The AT wound along a mountainside with good views through leafless trees. We paused often to take in the sights because the footing was tricky and demanded our attention too.

When we started to climb Albert Mountain, the trail grew extremely steep. Sometimes we even had to scramble up the rocks on all fours. We were in good spirits and the added challenge was fun for us. At the top was a fire tower with a nice vista… and the 100 mile marker!

The path down the north side of Albert Mountain was much more mellow. Shutterbug was relieved because downhill walking has always been tougher on his knees. He is happy to report that his knees have been feeling good since we got back on the trail. 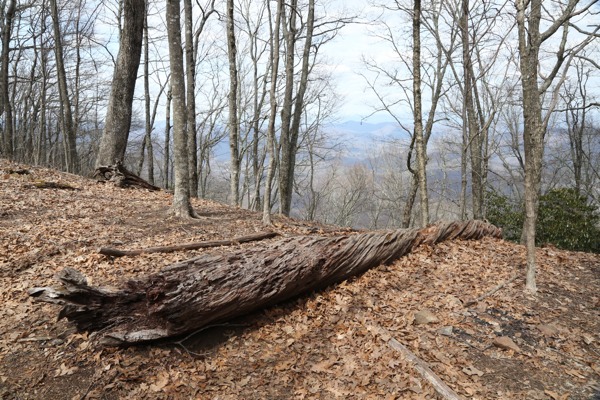 We descended to Winding Stair Gap, crossed US 64, then climbed back up the other side, regaining the elevation we had lost earlier.

Our favorite parts of the day weren’t on the actual Appalachian Trail, though. We decided to try some out-and-back side trails and were glad we did. The first was a hike up to the top of Siler Bald. This mountaintop was historically covered in grasses and free of trees due to grazing. Now that grazing animals are prohibited in this area, the US Forest Service periodically clears trees to maintain the grassy bald. We found fantastic unobstructed views after a short steep climb to the top.

Our second blue blaze trail took us to the historic Wilson Lick Ranger Station. This is where Grady Siler, the first Nantahala National Forest ranger, and his wife lived back in 1917. The weathered wood shingles and massive stone chimneys were fabulous.

We came across the day’s third blue blaze trail late in the afternoon while on the lookout for a campsite. The trail wasn’t marked on our map but we decided to explore anyway. Unfortunately this one was a dud. We turned back without finding a campsite.

We continued hiking along the AT and entered a peculiar section of forest. Many of the trees were snapped in an unusual location – halfway up the trunk. Others were completely uprooted. Yet the area didn’t have other signs indicating an avalanche or fire damage had caused the destruction. We later learned the culprit was a microburst, a short but extremely powerful gust of wind.

We see and learn something new every day out here.