Day 16-25: Southern Hospitality Gets us Back on our Feet

North Star’s aunt Cindy was an awesome trail angel for us as we waited for Shutterbug’s knee to heal. Her daughter Caryn helped out too.

Cindy housed us, fed us well, loaned us clothing, and let us borrow a laptop. Shutterbug’s favorite spot this past week was the couch, with a laptop on his belly and his knee elevated on pillows. 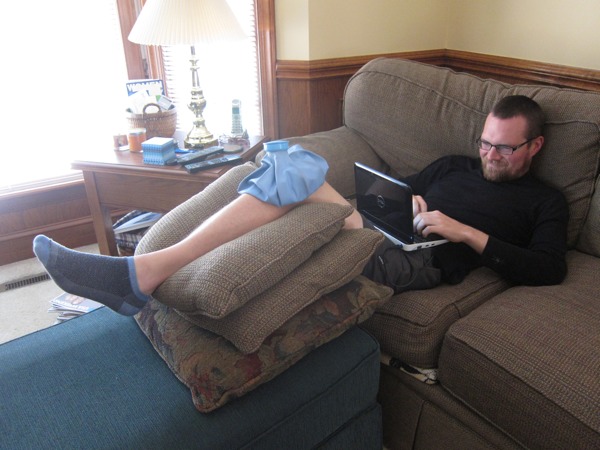 We made good use of our time off the trail. One of our tasks was replacing gear that was too worn out from last year’s Pacific Crest Trail thru hike to survive long on the AT. We got a few new small items, and two major items. Gossamer Gear is sponsoring us on the AT and sent North Star one of their new size small Gorilla backpacks. Big Agnes liked our PCT campsite video so much they gave us a new Fly Creek UL2 rain fly and tent body. Yay for new gear!

We also did some PR work for our PCT photo book. We’re very proud of the book and we spread the word when we can.

As Shutterbug’s knee pain lessened, we took short test walks around the neighborhood to get a sense of his progress. After 9 consecutive zero days we decided it was time to return to the trail.

Cindy and her partner Tim drove us back to the trail. We felt physically and mentally rejuvenated after our time off.

The weather was much improved compared to the day we’d left the trail. Now it was warm and dry without a trace of snow. We both hiked in t-shirts. It was hard to believe that just over a week ago we’d been cold despite wearing every piece of clothing in our packs. 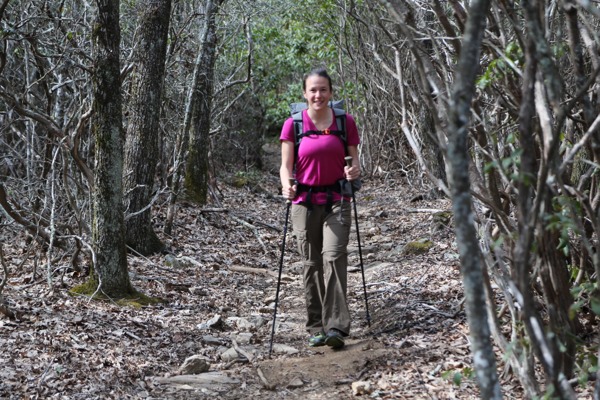 We began to see the first few signs of spring. Rhododendrons were sprouting new leaves and buds. We also noticed a definite increase in the number of birds near the trail. Their songs delighted us. Though most of the forest still lay dormant, it was exciting for us to witness these hints of springtime.

We walked slowly and carefully to avoid re-injuring Shutterbug’s knee. The knee felt good – no pain! We covered only a few miles but were very happy to be back on the Appalachian Trail.