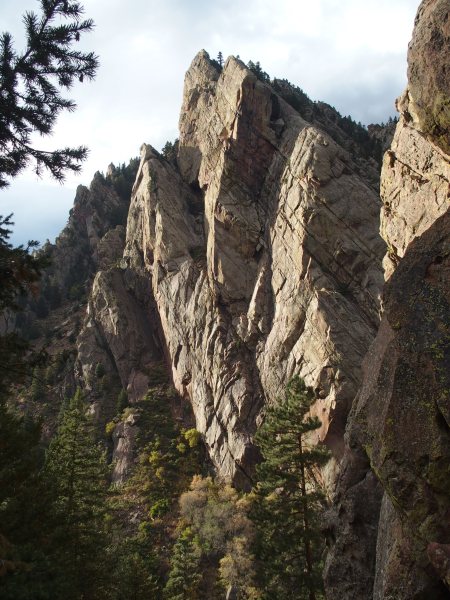 South Boulder Creek flows below in the bottom of the canyon.

We decided to hike Fowler Trail, which winds along the cliff edge. It offers great views of the creek gushing below and the peaks above, including many climbers scaling the rock faces.

END_OF_DOCUMENT_TOKEN_TO_BE_REPLACED

In May we had the chance to spend a week in Santa Fe with family. We couldn’t wait to visit the desert again! Our itinerary included an excellent day hike in Kasha-Katuwe Tent Rocks National Monument. At 3 miles roundtrip, the hike was short, but it included some fantastic geology.

The hike began with flat or gradual uphill sections beneath tall canyon walls. We were impressed that some large pine trees were able to grow despite the difficult conditions.

We found a kingcup cactus flaunting its bold red flowers near the trail.

As we continued, the walls around us narrowed. Rock strata were on display with varying white and pink tints. It felt like we were walking through a piece of abstract art.

The elements had carved beautiful shapes into the rock. Shadows painted the graceful curves.

END_OF_DOCUMENT_TOKEN_TO_BE_REPLACED

We love Glacier National Park, but had never visited its Canadian side, known as Waterton Lakes National Park. We arrived at Waterton to find it had gotten snow too, just not as much as Banff and Jasper. Our first stop in the park was the Prince of Wales hotel. It resembles a massive Swiss chalet, built on a hill overlooking Upper Waterton Lake. Thick clouds added to the hilltop panorama.

Next we headed to the visitor center, where we asked a ranger about the best wildlife viewing spots. They said someone had spotted elk by Hay Barn Road that morning. We headed down that dirt road. The elk had moved on, but we did find this grouse munching on bright red berries.

Looking out into a grassy meadow, we spotted a coyote! Awesome! We watched until it trotted off.

We headed towards Red Rock Canyon next. On the way, we noticed a car with binoculars pointed up towards the hillside. We stopped and asked what they saw. A black bear! The bear ate constantly as it plodded along the snowy hillside. Mid-September in Waterton meant winter was closing in. The bear must have been filling its tummy before hibernating.