Hello! I’m Becky, Chri- er, Shutterbug’s sister and special guest blogger. North Star and Shutterbug were generous enough to slow down their breakneck hiking pace for a bit so that North Star’s friend Karin and I could join them on the trail and get a little taste of their ongoing adventure. I suggested I might write a post about it, and they were game, so here it is.

Karin and I chose to meet Shutterbug and North Star at Castle Crags State Park. We woke up early and drove to the trail head, waiting just a few minutes before our intrepid hikers emerged from the wilderness right on schedule. They were a bit skinnier and dirtier than I’d remembered them, but as cheerful and energetic as always. It was great to see them again! Not so great to smell them. (Just kidding! They smelled fine.)

Next we headed to the lovely little town of Dunsmuir for lunch. There we met North Star’s work friend Dante, who arrived with a big group of friends and family. Dante brought his delicious homemade strawberry shortcake. The shortcake, it turned out, was only the beginning of an eating extravaganza that lasted throughout our time in town. I watched in awe and mild queasiness as North Star and Shutterbug collectively scarfed down: four pastries, 7/8 of an extra large pizza, four nectarines, four bananas, about half a pound of cheese, two apples, and two ice cream sandwiches. Given time and food, they could have kept going, no question.

Then we were off! It was a pleasant, early evening hike to our first campsite in a shady, wooded spot by a gurgling creek. 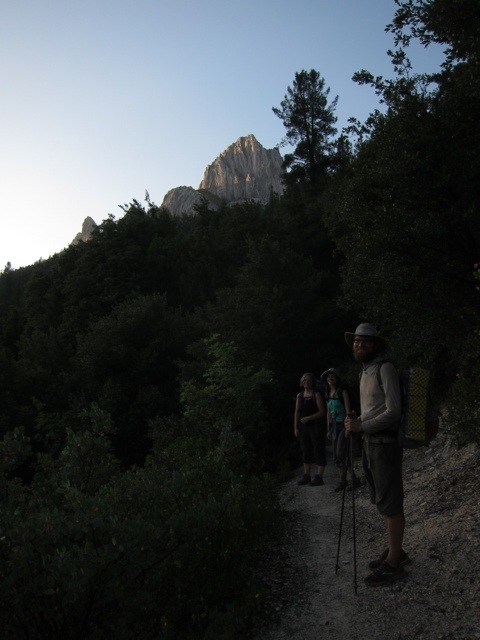 After an easy walk through the woods, we began the section of our route that made me a bit apprehensive: a 3000 ft. climb under the hot summer sun. All in a day’s work for a PCT-er, but a challenge for a dilettante like me. My advice for other aspiring but not terribly in-shape backpackers: take the lead! It works great. You get to set the pace and take breaks whenever you want, and everyone else gets to admire the view while you catch your breath. And then to admire it again. And yet again a few minutes later.

A lot of scenery got admired on that climb, but luckily it was worthy of the attention: large, sweeping vistas of forest-covered mountains with the jagged teeth of Castle Crags looming above. 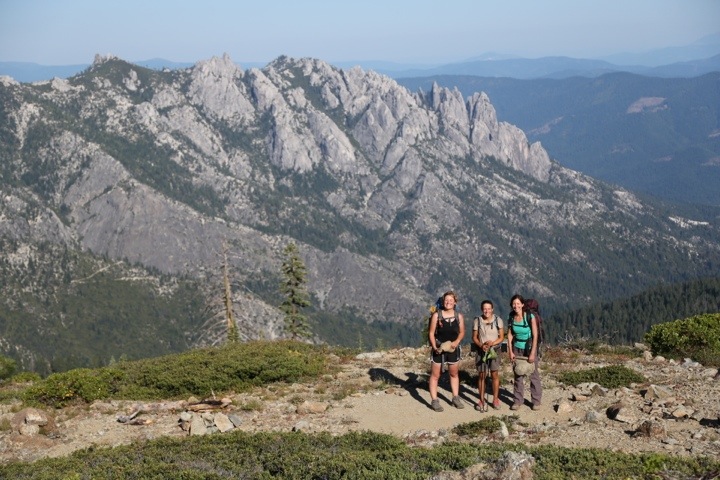 At lunch we sat in the shade by a small spring where a handful of other PCT hikers had already stopped to rest and stock up on water. It was fun to chat with them as they ate their enormous bags of skittles and giant loaves of Nutella-covered bread. (And, I admit, I was a little gratified to hear even these hardened backpackers complain about the morning’s climb.) There is clearly a real sense of camaraderie on the trail that was fun to see.

Although things started to level out a bit after lunch, I was still basically running on fumes by the time we set up camp in the early evening. We had only gone 13 miles that day (“only,” ha!), and a few passing hikers gave our lovely, wooded campsite envious miles-to-go-before-I-sleep type looks as they marched on by. Shutterbug took pictures and Karin and I took Advil as the sun set over the mountains and the moon appeared, big and bright.

The day’s agenda: 17 miles. More miles than I’d ever hiked before, even without a giant pack making me lumber around like a clumsy tortoise. Luckily for me the terrain was relatively flat, with shorter, gentler ups and downs. We rose with the sun and spent a quiet morning with the birds and the constant buzzing of insects. Chipmunks and lizards skittered by, while snow-covered Mt. Shasta loomed in the distance.

We took a late morning break at a spot where a clear line of sight to the town of Shasta gave North Star and Shutterbug the internet access they needed to upload their latest blog post. Watching them at work gave me a real appreciation for the time and energy they have been putting into maintaining this blog and keeping up with all of us readers. Their tight schedule makes their time a precious commodity. All that writing, picture-taking, editing and uploading is clearly a labor of love.

Later that afternoon the trail made its way down to a road, then headed back into the trees where Karin and I were able to have our first delicious taste of Trail Magic in the form of two large buckets filled with still-cold cans of fizzy fruit juice. Thank you, trail angel!

We broke out the stoves for a late lunch by Porcupine Lake. Chris and Anna ate more mashed potatoes than you have ever consumed in one sitting in your life, while Karin and I had some mac and cheese that didn’t turn out quite right – chewy macaroni and runny cheese. We got sick of it towards its soupy end, and didn’t want to finish it.

North Star: What if I poured the macaroni juice into the potatoes?
Shutterbug: Hm, yeah! That sounds good!

You know you’re a through-hiker when you find yourself following the words “macaroni juice” with the phrase “sounds good.”

The lake was chilly, but Karin and I took the plunge. There’s nothing like floating on your back in a mountain lake and looking up at the clouds. Not one single thing. 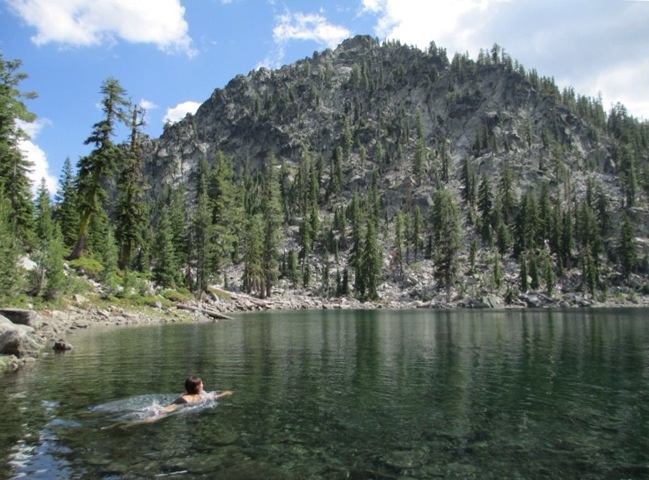 Then we dried out and packed up for the last five miles of the day. The trail turned brick-red and rocky as it rose to a mountain pass and headed back down through the trees and into the valley where we rejoined Dante, Andy, Kiki and the kids. They had already set up camp and were ready and waiting to greet us with cheers and instant oreo pie. The kids looked like they had been having an awesome time swimming and running around in the woods. It was great to see them having so much fun.

Karin and I parted ways with Shutterbug and North Star early the next morning to begin our hike back to the car. I was sad to see them go, but the enormous blisters on my feet weren’t. The two of them had already slowed down quite a bit for us, and we were nevertheless pretty beat. It amazed me to think of them doing what we had done plus a good bit more, every day, day after day.

Throughout the trip I peppered them with questions: Don’t you get bored? Don’t you get sick of each other? Don’t you get sick of eating energy bars all the time? Doesn’t your brain freak out and turn in on itself cannibalistically for lack of human-made stimulation? The short answers: No, no, no, and no. They love watching the landscape go by. They’re two very even-keel, thoughtful people who can recognize when fatigue or hunger is getting to them and try not to take it out on each other. They’ve sent themselves boxes full of a variety of foods that they like, but they’ll settle for macaroni juice in a pinch.

All I can say is, good thing those two crazy kids found each other! I had a wonderful time with them on the trail, but I also really enjoyed that nice hot shower when I got home, and am currently having a blast here in my soft, warm bed, resting my poor, poor aching feet. Meanwhile, up there in the wilds of Northern California, North Star and and Shutterbug are probably pitching their tent right around now, unrolling the sleeping bags one more time. More power to them! I can’t wait to hear all about it in their next post.

Thanks Becky for writing this post, and thanks Karin for contributing some of the images. We are really glad you could join us on the trail! — North Star and Shutterbug