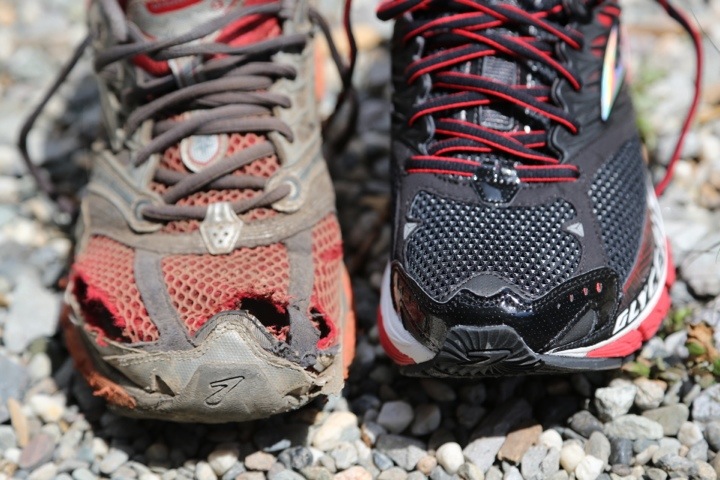 Leaving the comforts of Echo Lake, we headed off into the Desolation Wilderness, where we walked past all sorts of lakes, big and small.

Unfortunately Shutterbug developed bad stomach issues, making frequent breaks a necessity. We weren’t sure of the cause, perhaps overeating in town. His discomfort was bad enough that we opted to stop and set up camp early. Though we hadn’t covered as many miles as we’d hoped, modifying our plan was the best thing to do.

After a good night’s sleep, Shutterbug’s stomach was feeling good enough to hike, though not perfect. We continued on and were both excited by the many beautiful lakes we passed, some teeming with fish.

Later in the day we travelled through a mix of small meadows and forest. We love the constant change we witness on the trail.

At dinner Shutterbug was feeling much better and he ate heartily. Our already large portions were increased further when several mosquitos added themselves to our dinner. It wasn’t clear whether mosquitos should be part of a vegetarian diet, but there was no time for debate.

As dusk descended, the mosquito swarms worsened. Lying in the tent, we counted over 200 mosquitos under the rainfly, trying to invade through the mesh. None succeeded. We fell asleep to lovely bird calls and sound of running water nearby.

Though the swarms had dwindled, the remaining mosquitos encouraged us to pack up quickly after we woke. The trail quickly turned uphill, which helped us escape the bugs, and also led us into some spectacular wildflower patches. We saw mariposa lilies, paintbrush, lupine, Sierra daisies, flax, and whole hillsides covered in mule’s ears. What a treat!

Over the past two weeks we have been slowly dropping in elevation. This means easier breathing, as there is more oxygen in the air, but the temperature is also increasing. Today it was noticeably hot out, though we thought this was a fair trade for all the amazing wildflowers.

We had a gorgeous morning walk along a ridge, with an expansive view of peaks and rolling hills. Only a few patches of snow remained on the higher peaks. We were in high spirits.

Soon, though, a fast off-camber downhill section of trail aggravated North Star’s shin. This was as mentally frustrating as it was physically painful, because we know shin splints can end thru hikes. Hoping to reduce the pain, we slowed down, took more breaks, and hiked five fewer miles than we had planned.

Otherwise, we had a good day. Near Donner Pass and Highway 40 we met several groups of excited day hikers. One group brought beer, apples, and candy for thru hikers (thank you)! Another group of friends was considering hiking the trail, and we were happy to chat. We love sharing our journey with others.

After a long sleep, North Star’s shin was marginally better. We spent the day trying to minimize her pain, while still making mileage towards Sierra City, our next town stop. Along the way we ran into a famous 75 year old hiker named Billy Goat. Despite the physical challenges of his aging body, he spends almost the entire year hiking and camping outdoors. He has walked over 41,000 miles of trails to date. Wow!

In the afternoon, we were both tired and North Star’s shin was hurting, so we stopped for a nap. Refreshed, we hiked five miles further and set up our tent on a nice ridge.

The morning was breezy and lovely. A few miles in, we ran across PCTA volunteer trail workers removing vegetation, which was growing into the trail. They were also affixing new trail markers and clearing downed trees. Thanks!

We were glad the trail remained mostly forested today, as the exposed rocky sections were hot. In the shade, we sighted our first leopard lilies of the hike!

In the afternoon we hiked several miles with our friends Mama Bear and Monkey. At only eight years old, Monkey is at the opposite end of the age spectrum from Billy Goat. Monkey is the youngest thru hiker on the trail, and as you might guess, Mama Bear is her mother. As always, it was great to chat with them.

After following in Monkey’s footsteps for a ways, we began to notice the additional challenges she encounters on the trail: She must climb high rock steps, and she has to take twice as many steps as the rest of us to cover the same ground. Mama Bear and Monkey are quite an impressive pair! (Note: The photo below was taken about 700 miles ago, since we forgot to snap a new one yesterday.)

In mid-afternoon we reached Sierra City, a cute one-street town with all the essentials: a grocery store, a few restaurants, two motels, and a post office.

Although there are many challenges to living in the backcountry, the rewards are even greater. On Day 80 we met a hiker named Ken Tran (trail name: Half Slow) who recited to us an elegant poem expressing this sentiment while standing on the shore of Fontanillis Lake. Ken’s poem closely matches our own feelings, and he kindly allowed us to share his poem here:

I hike to meet the serene faces of Harmony and Peace.
I hike to glimpse at fragility that moves Boulders.
I hike to quench in life-giving generosity of Trail Magic.
I hike to conquer the Fear and Isolation from Forgotten Freedom.
I hike to instill in my heart the indelible colors from dawn to dusk.
I hike to know that the most important things in life aren’t things at all.
I hike to redeem for the shortcuts taken in Life’s rat-race.
I hike to sense the indomitable Spirit granted on each step.
I hike to pause in Catheral Forest and breathe in stillness of Forever Time.
I hike to realize that I have destroyed nothing to get here except for the fear and doubt to discover my true worth.