The crazy hail storm had passed and a variety of birds were greeting the new day. Take a listen to a minute of what we heard:

Unfortunately North Star’s painful headache still hounded her. The dizziness she’d been experiencing for the past week intruded as well. Bending over to pack gear made her head spin, forcing her to take several sitting breaks. We were dismayed that her symptoms were not improving.

The trail followed the border between Tennessee and North Carolina, taking us past beautiful old trees. All the recent rainfall nourished the wildflowers, known as “spring beauties,” which carpeted the ground. Shutterbug enjoyed the views, but North Star’s mold headache was so powerful that it made walking very difficult for her. The pain meant she couldn’t enjoy any of the beauty around her. 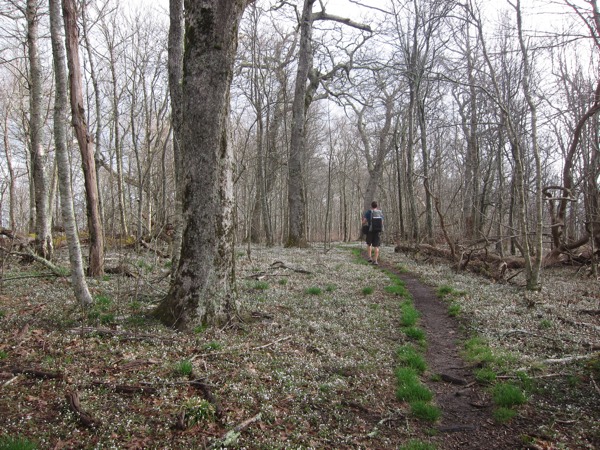 We kept walking. Fog blew in, at times condensing into rain.

We reached the Spence Field shelter where we cooked up a hearty dinner of couscous and pinto bean flakes. From our tent we heard rumbles of distant thunder. Though North Star was tuckered out she had trouble sleeping because of her headache.

The morning was foggy and extremely windy. The gusts were strong enough to knock us off balance. Sometimes we glimpsed distant peaks through the fog.

We try to avoid complaining on this blog. We barely mentioned North Star’s headaches and fatigue, even as they grew worse and worse. But now her health has declined to the point where we must give a deeper explanation.

North Star has been dealing with an unusual and very serious mold reaction for three years. She does not have a typical allergic response. In moist, moldy areas she experiences severe migraine-like headaches, extreme fatigue, and sometimes dizziness and difficulty concentrating. She has seen numerous western doctors, allergists, and non-traditional healers. We’ve learned through trial and error what works and what doesn’t. She takes several medications year round to combat her mold allergy and its symptoms. We were nervous about the Appalachian Trail being too moist, but our practice hikes over the winter seemed to go fine so we continued with our plans.

As the weather on the Appalachian Trail has grown warmer and wetter, North Star’s symptoms have worsened dramatically. She’s had a nonstop headache for over a week. Her head hurts as soon as she opens her eyes in the morning. The ache worsens and throbs with exertion, especially when climbing hills. At times the pain is excruciating. Rest calms it down some but the pain never goes away. Every night she is completely exhausted but her head hurts so badly she has difficulty sleeping.

Each day on the trail or resting in town we keep hoping her condition will improve, but instead it has worsened. Her headache is relentless and new problems are cropping up such as a rash on her forehead, swollen lymph nodes, and more frequent dizzy spells. We dealt with difficulties many times during our Pacific Crest Trail thru hike (bad weather, recurring problems sleeping after a bear incident, shin splints, etc.), but this is much more serious.

Today we made the decision to permanently leave the Appalachian Trail and seek a drier climate. We cried. We were deeply saddened to leave the trail and its community and scared that North Star has pushed her body too far and may have additional health problems.

We slowly made our way to the next shelter. We arrived later than other backpackers and the area was quite crowded. 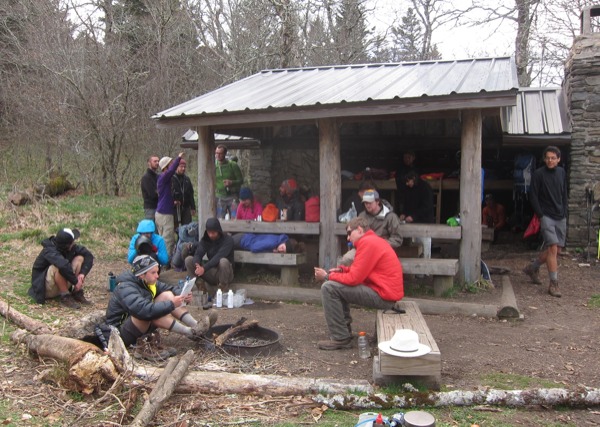 We camped under nearby pine trees. North Star’s headache continued and the unusual red rash on her forehead worried us. It was a rough day.

Wind-driven rain pelted the tent overnight. As we began packing up in the morning, the rain intensified. North Star’s headache was already very strong and we knew it would worsen as we hiked.

Hiking through pouring rain, we reached Clingmans Dome. At 6,643 feet this is the highest point on the entire Appalachian Trail. It is also 200 miles from Springer Mountain in Georgia where we began. On this day, all we could see from the top was fog.

We descended back into the forest. Heavy rain created puddles on the trail.

North Star misstepped on the slippery trail and took a rare fall. She was uninjured but shaken up. The deluge eventually turned the trail into a river, complete with small waterfalls. The flow carried sticks past our legs as we walked. 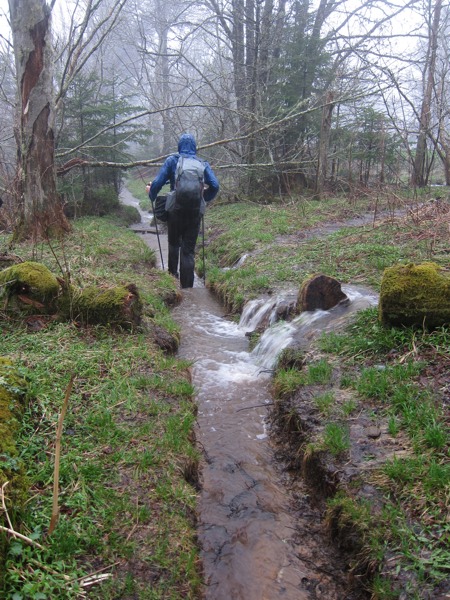 We reached the road at Newfound Gap. A kind trail angel drove us into Gatlinburg where we got a motel room.

North Star continued to feel terrible even though we were resting and didn’t have the strain of walking miles over mountainous terrain. Her headache was as bad as ever and she remained unnaturally tired. We needed to get to a drier climate as fast as possible. That afternoon we boarded a flight to Denver.

After a day in dry, mold-free Denver we were concerned. North Star had only slightly improved. We went to an urgent care clinic where she was diagnosed with shingles.

Like most people, North Star had chicken pox as a child. Afterward the virus remained dormant in her spine. On the AT, her body was overextended and stressed by her unusual mold reaction. Her drastically weakened immune system could no longer suppress the shingles virus and it spread to her forehead, scalp, and the area around her left eye.

Even with medications, we are told that full recovery will take between two weeks and several months. The upcoming weeks will be focused on healing and thinking about our new plans. Unfortunately hiking Te Araroa in New Zealand won’t be possible as it is far too wet. We’ll likely make Fort Collins, CO our new home base for at least the next two months. We haven’t yet decided what comes after.

Whatever we end up doing, we will definitely continue hiking and blogging about our adventures. We are optimistic about the future despite our recent setbacks. We love the wilderness and we have a lot of exploring ahead.