A clear sky greeted us as we entered the Goat Rocks Wilderness. We feel lucky to have had such great weather on our Pacific Crest Trail thru hike, especially in typically wet Oregon and Washington.

After several miles in a pine forest, the PCT climbed to Cispus Pass, where we crossed a small patch of snow.

The valley on the other side of the pass was filled with spectacular waterfalls and amazing wildflowers. 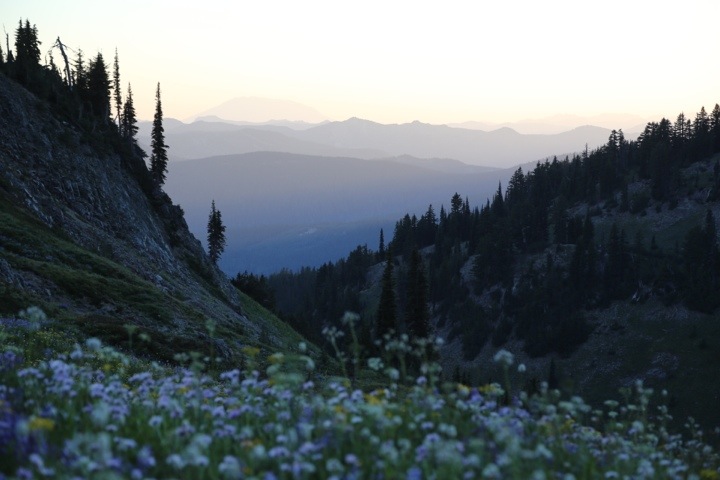 We camped with other backpackers on a hillside near a waterfall. Stars filled the sky, as many as we had ever seen. It was magical.

We began climbing early, and were quickly rewarded with gorgeous views.

The landscape became rocky and stark as we climbed further. A marmot tried to hide from us, but couldn’t resist a peek.

Minutes later, we walked across a glacier, a first for us!

Reaching the top of the climb, we gawked at the snow-covered peaks and glacial valleys in all directions. The knife-edge descent proved as awesome as the climb.

A few miles later, North Star spotted about ten mountain goats in the valley below. We excitedly watched them graze in their namesake wilderness.

We couldn’t linger, though, because we needed to reach the store in White Pass before it closed. Descending quickly through the forest, we arrived at the store, which was still open. Success! We picked up our food resupply boxes, ate tasty veggie sandwiches, then rested in a room at the inn.

After seven days of solid walking and struggling with allergies, we decided a rest day was in order. In addition to giving our bodies a break, this allowed us to catch up on our blog entries. In the morning we uploaded an entry which we had mostly written while on the trail. Then we bought more food at the store, and got to work on the next blog entry.

After a few hours of photo selection, writing, and editing, we finished a second blog post. As always, we had several big hiking days ahead, so soon it was time to sleep. Thunder rumbled outside as we climbed into bed.

The thunderstorm overnight left cold, moist air in its wake. As we walked in the forest above town, dramatic fog swirled over lakes and obscured trees.

Despite the moist air, North Star’s allergies remained manageable. The rest day had revitalized her.

We were pleasantly surprised to spy a great blue heron in a small marshy lake. 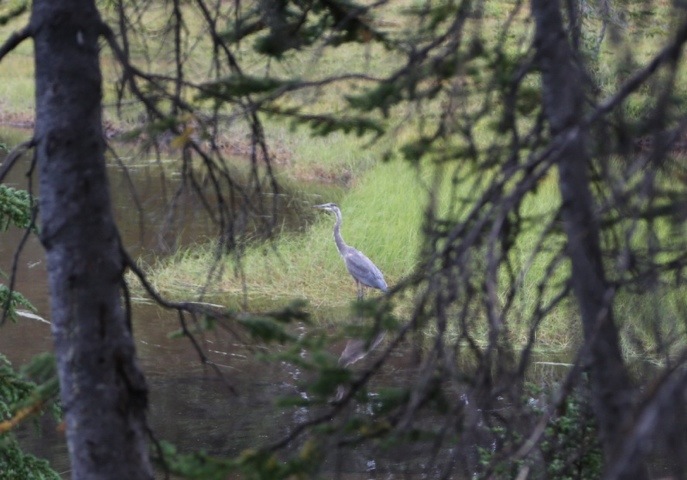 When the heron noticed us, it flew gracefully into the mist.

Later in the day, as we entered Mt. Rainier National Park, an elk bugled in the fog. The hollow whistling sound was wild and beautiful.

We camped in a little spot amidst trees, which somewhat sheltered us from the cold foggy wind.