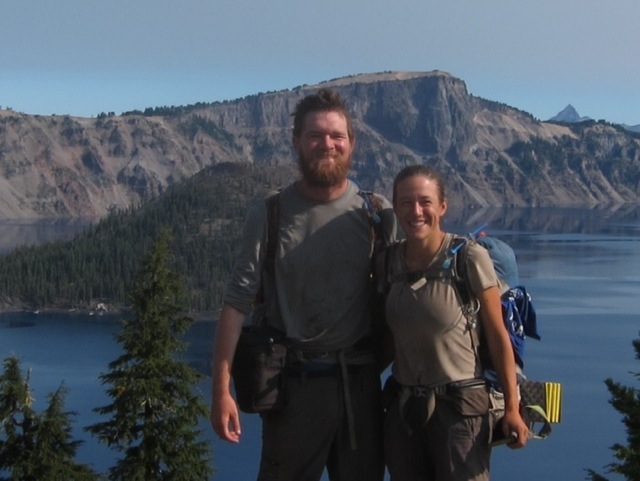 Bone Lady caught up with us and we walked together for a few miles. As we hiked, Mt McLaughlin came into view.

With each step we kicked up a cloud of volcanic ash, which found its way into our shoes and socks. Our feet compacted the ash into hard clumps, making walking uncomfortable unless we stopped to scrape out the deposits.

Later in the day, we left the lava fields and entered a forest.

A few miles into the day, the trail ascended to a ridge, where we enjoyed wonderful views for miles. We also found some goofy-looking puffball flowers growing on the rocky slopes.

After a hot section without much water, we plopped down at a small creek to cook lunch, since we would soon enter a 20-mile waterless stretch. Many other hikers felt the same way, and bit by bit more people joined us: Paul and Chantal (the French couple), Kanji and his friend from Japan, Little Bear, Super Girl, Magic Paul, Cool Ranch, Capitan, Lala, and Day Man. It was a napping, eating, and water filtering party!

Our meal complete and the sun past its peak, we hiked on. Soon we entered a burned forest. It was a stark, quiet, contemplative place to end the day. 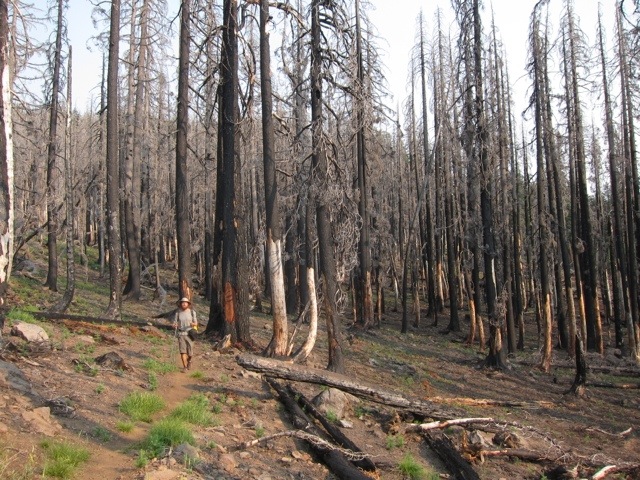 We walked through a densely forested area, and crossed into Crater Lake National Park, though we were still too far away to view the lake itself.

As we neared the road, we realized how dirty we were. We were positively filthy! The trail in the past few days was the dustiest we had ever experienced. Like Pigpen, clouds of dust followed us as we walked, coating our clothes and skin.

Leaving the forest, we picked up our planned food resupply boxes from the Mazama Village Store. To our surprise, we found an extra package marked on the pick-up list. It was an early birthday package from Jim and Cindy, filled with lots of sweet treats! Yay!

We woke early and walked up to the rim of Crater Lake, passing several beautiful creeks on the way.

The PCT followed Crater Lake’s rim for a few miles. We stopped often for pictures, and thoroughly enjoyed every moment of the walk. The water was a startlingly deep shade of blue.

We believe Mark Twain’s quote about Lake Tahoe applies equally to Crater Lake. In Roughing It, he wrote that the lake “would restore an Egyptian mummy to his pristine vigor and give him an appetite like an alligator. I do not mean the oldest and driest mummies, of course, but the fresher ones.”

As we gawked at the lake, much revived, another hiker told us about a new forest fire to the north. Luckily we had a cell signal and were able to research the detour we would need to take in two days when we reached the affected area.

The trail eventually pulled away from Crater Lake, and we entered a forest, where we camped.

The sun rose a deep orange, and the sky was mostly white, from smoke in the air. We walked through a forest of tall, skinny lodgepole pines, and were gradually nearing the fire, but could not see it.

After crossing Highway 138, we met Wired, who thru hiked the PCT last year. We were thankful for her extensive blogging, which had helped us prepare for this journey. We enjoyed talking with her as we ate the trail magic goodies she brought along. 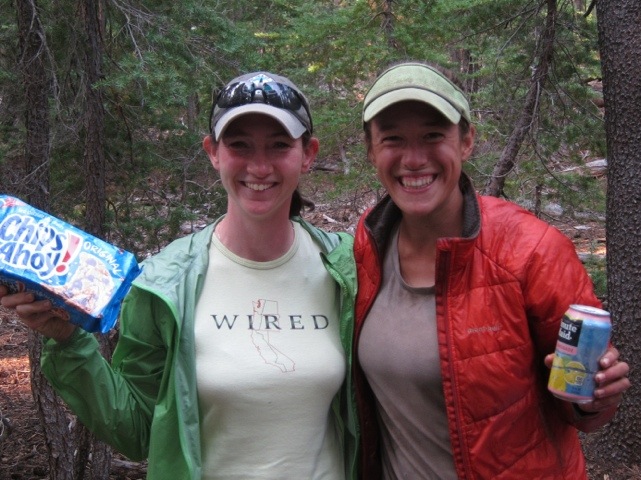 Saying our goodbyes, we headed up the forested hillside. Small stretches of the trail were snow-covered, even in mid-August. 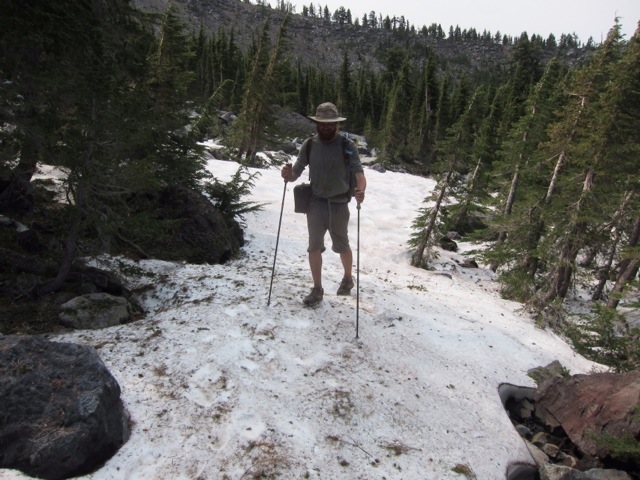 We lunched under Mt. Thielsen next to a beautiful ice-cold snowmelt creek.

We walked a few miles farther, then camped early to work on this blog post. We hoped to be well-rested, so we could walk 28 miles on North Star’s 28th birthday tomorrow! 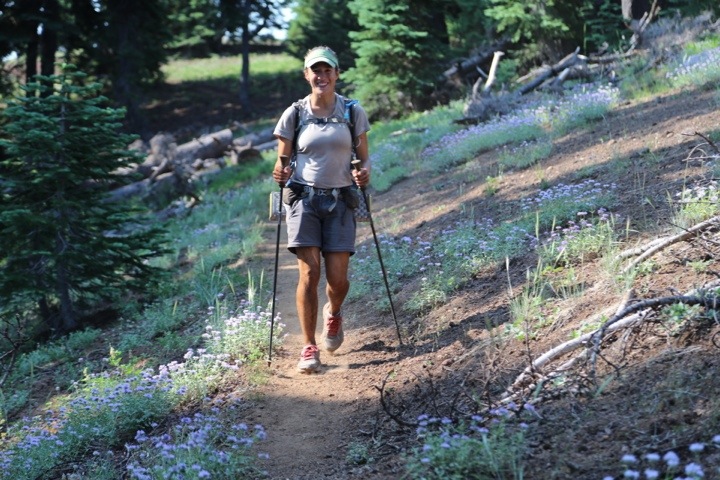